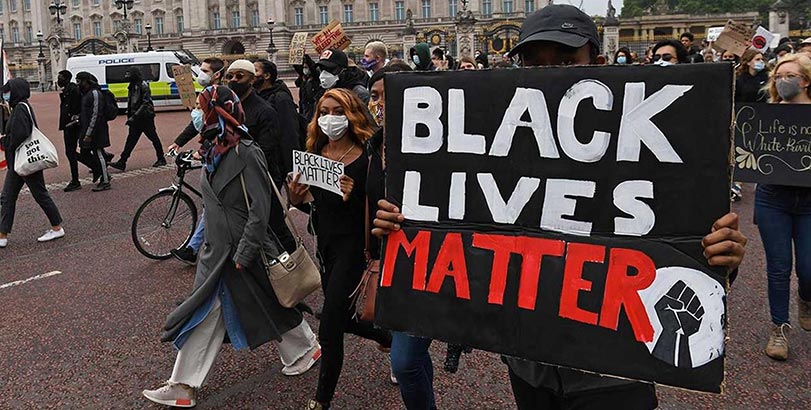 By Clement Hammond Posted 8/26/2020 in ENTERTAINMENT

With the country in turmoil celebrities emerged with vocal support of the Black Lives Matter movement.

A deeply-divided nation is struggling with something very important and the stars of Hollywood seem mostly aligned on the matter.

The solidarity that most are showing against the systematic racism that is costing black lives in the streets of America is not going unnoticed. The deaths of George Floyd, Ahmaud Arbery, Breonna Taylor and more have opened wounds our nation must share and face together; the following is a short list of celebrities who have acknowledged that fact.

This rising young electropop star shot to fame by taking advantage of non-traditional media like YouTube 2015. From there, Billie Eilish took off and would eventually sell over 37 million copies of her album in 2019, winning many awards and solidifying her current status as the edgiest and most successful young singer of the era.

Lately, Billie has been using her gigantic social media following in vocal support of the Black Lives Matter movement. In fact, with her 65 million Instagram followers, her posts are some of the most widely-shared comments on the matter. This Generation Z star is definitely not bashful when it comes to making polarizing though heartfelt statements, such as when she expressed annoyance at the selfishness of the “All Lives Matter” counter-response to chants of BLM. Amazingly, many people have spotted Eilish – sans visible bodyguards – driving around the city waving various cardboard signs in support of Black Lives Matter.

One of the kings of rap and hip-hop for nearly a decade, Aubrey Drake Graham has not been bashful in his support of Black Lives Matter. With celebrity news always focused on him in some form or fashion, Toronto’s finest takes every opportunity he can to share timely posts on one of his many social media platforms.

In particular, under his “champagnepapi” Instagram handle, Drake left a potent poem on Affirmation for his nearly 70 million followers to see. Although the words were powerful enough, the mononymous singer-songwriter followed up his post with a $100,000 donation to the National Bailout nonprofit that is dedicated exclusively to bailing out black moms and healthcare workers who end up in jail for protesting in BLM rallies.

With an insanely successful career that has spanned multiple decades, Madonna Louise Ciccone has been revered as the Queen of Pop (next to the late Michael Jackson’s ‘King of Pop’) ever since the early 1980s when she began her journey to become the highest-grossing female performer of all time with 300 million records sold around the planet. Madonna has never hid from controversial topics including her unceasing support of the Black Lives Matter movement.

In fact, nearly every week Madonna is actively doing something in support of the cause. In Central London, for example, Madonna is routinely seen marching in BLM rallies. This is even more impressive she recently suffered a leg injury that has her unable to support herself. Yes, ladies and gentlemen – Madonna is out there in those rallies on crutches. Like millions of people around the world, she wants justice for George Floyd and others that have been unjustly taken in recent memory.

A standout comedian that took over The Daily Show from the inimitable Jon Stewart, Trevor Noah had a front-row seat to discrimination against blacks in South Africa, where he was born and grew up during the Apartheid regime. It is no wonder that he is one of the most vocal celebrities regarding the BLM movement, using his skill at political commentary to craft heartfelt Instagram videos of himself speaking to the public.

In a recent post made by Trevor Noah, he remarked that stores being looted is equivalent to the “police in America looting black lives.” Whether this is strictly true or false – it is a powerful statement that has undoubtedly resonated with many. In support of his efforts, other members of the Daily Show have actively participated in BLM events – the show, itself, has been used as a platform to speak to prominent guests that are at the forefront of the movement.

None other than the incomparable Michael Jordan has decided to join the fray in support of the Black Lives Matter movement – and boy, did he ever make an impression when he landed. In early June of 2020, the greatest basketball player to ever lace them up pledged a whopping $100 million through his Jordan Brand and Nike, all to a spate of organizations that are dedicated to “ensuring racial equality, greater access to education and social justice” for all. In the actual statement, the Jordan Brand made sure to highlight Black Lives Matter as the driving force for this pledge; in fact, they furthered the general message by specifically mentioning the need to protect and improve the lives of black people in this country (and ostensibly, around the world).

As one of the founders and CEO of the mega-social site, Twitter, computer programmer and business magnate Jack Dorsey is another prominent figure that has contributed positively to BLM. Not content to “merely” alter his Twitter avatar to a Black Lives Matter fist, Jack also pledged $3 million to organizations centered on racial justice. In particular, the bulk of his pledge will be going to former NFL quarterback Colin Kaepernick’s anti-racism fund. The latter was started in conjunction with shoe giant, Nike – which makes NIKE a two-time winner in the call for racial justice, because of their similar liaison with NBA great Michael Jordan. Although Jack Dorsey hasn’t been the only social media giant to involve himself with BLM (YouTube’s Susan Wojcicki and Facebook’s Mark Zuckerberg have followed suit), he is, to date, the most prominent with his consistent references on Twitter.

In what some regard as surprising celebrity news, the NFL recently committed a huge pledge to the “fight against systemic racism”; to the tune of a whopping $250 million over a decade – eclipsing the contributions made by any single person (or even organization) to date. To many people, this contribution was surprising because of the Colin Kaepernick issue several years ago, when the NFL player had refused to stand for the American flag and instead chose to kneel in protest to atrocities committed against its own citizens (Black Americans, in particular). It appears that the NFL has changed course.

World-renowned supermodels, Gigi and Bella Hadid, have promoted their own takes on the Black Lives Matter movement since the early 2020. They ramped up their efforts when George Floyd was murdered while in police custody. Bella put up a painted mural of George Floyd on her Instagram page, which has over 31 million followers. She has expressed how her feelings on the matter have vacillated between sadness and anger at the death of Floyd, and the status of the four officers involved.

In the early days, only one officer had been charged; as of July 2020, all four have had charges levied against them. Additionally, Bella has donated and encouraged her followers to donate, to The Official George Floyd Memorial Fund. She has also personally donated to the NAACP Legal Defense Fund and the families of Floyd and Breonna Taylor (who was shot by police in her sleep when they entered her home on a warrant).

Not to be outdone by her older, Gigi Hadid has been using her even larger Instagram follower count of 55 million to promote a slight twist on the BLM movement – the Black Disabled Lives Matter subgroup. She has cited stats that show 50% of the people killed by police were disabled.

We’ve only scratched the surface today. Many more of world’s biggest stars have pledged themselves to the goal of racial equality, and as the majority of Americans join together in this cause true change may come.